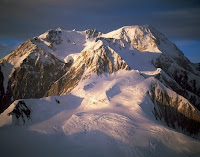 With recent aspirations of the "New Year" in sight, I am reflecting on the rededicated goals that lie before me. I sometimes view my learning about God through studying the Bible as comparable to- climbing a mountain. It's hard work, but the higher up you get, the more impressive and amazing the view is. The context of these thoughts is reflected in the theme picture of my blog. I wonder if anyone ever noticed it...by that token, I wonder how many people are actually reading these thoughts (quietly laughing to myself). In any case, that beautiful majestic rock in the picture above and to the left is Denali and I intend to make an attempt on her summit this year of 2010. In consideration of this goal and my desire to glorify God throughout the whole journey, I have been searching the scriptures of comparable aspirations. Many notes have developed and I will here, perhaps in multiple entries attempt to convey them in some thoughtful pattern. First, let me tell you about this mountain-Mount McKinley or Denali ("The Great One") in Alaska is the highest mountain peak in North America, at a height of approximately 20,320 feet (6,194 m) above sea level. Mount McKinley has a larger bulk and rise than Mount Everest, although the summit of Everest is higher measured from sea level 29,029 feet (8,848 m). Everest's base sits on the Tibetan Plateau at about 17,000 feet (5,200 m), giving it a real vertical rise of a little more than 12,000 feet (3,700 m). The base of Mount McKinley is roughly a 2,000-foot (610 meter) elevation, giving it an actual rise of 18,000 feet (5,500 m).

The mountain is also characterized by extremely cold weather. Temperatures as low as ?75.5 ?F (?60 ?C) and windchills as low as ?118.1 ?F (?83 ?C) have been recorded by an automated weather station located at 18,700 feet (5,700 m). According to the National Park Service, in 1932 the Liek-Lindley expedition recovered a self-recording minimum thermometer left near Browne's Tower, at about 15,000 feet, on Mount McKinley by the Stuck-Karstens party in 1913. The spirit thermometer was calibrated down to 95 degrees below zero and the lowest recorded temperature was below that point. Harry J. Liek took the thermometer back to Washington, D.C. where it was tested by the United States Weather Bureau and found to be accurate. The lowest temperature that it had recorded was found to be approximately 100 degrees below zero. There is also a higher risk of altitude illness for climbers than its altitude would otherwise suggest, due to its high latitude. At the equator, a mountain as high as Mount McKinley would have 47% as much oxygen available on its summit as there is at sea level, but because of its latitude, the pressure on the summit of McKinley is even lower (42%). The first ascent of the main summit of McKinley came on June 7, 1913, by a party led by Hudson Stuck. The first man to reach the summit was Walter Harper, an Alaska Native. Harry Karstens and Robert Tatum also made the summit. Tatum later commented, "The view from the top of Mount McKinley is like looking out the windows of Heaven!". They ascended the Muldrow Glacier route pioneered by the earlier expeditions, which is still often climbed today. Stuck confirmed, via binoculars, the presence of a large pole near the North Summit; this report confirmed the Sourdough ascent, and today it is widely believed that the Sourdoughs did succeed on the North Summit. However, the pole was never seen before or since, so there is still some doubt. Stuck also discovered that the Parker-Browne party were only about 200 feet (61 m) of elevation short of the true summit when they turned back.
The mountain is regularly climbed today, with just over 50% of the expeditions successful, although it is still a dangerous undertaking. By 2003, the mountain had claimed the lives of nearly 100 mountaineers. The vast majority of climbers use the West Buttress Route, pioneered in 1951 by Bradford, after an extensive aerial photographic analysis of the mountain. Climbers typically take two to four weeks to ascend the mountain.....But many people might ask why? Why does Pearce Beissinger want to climb such a hill? What is so captivating about a mound of snow and ice. For more on this story, come back soon and read the next few follow-ups...See you at the top!
Posted by Pearce at 6:00 PM 1 comment:

It's a fine day when a man learns to control his bladder function...Life is interesting when you think how we start in diapers and often end up back where we started...In any case, my son became oriented to the porcelain throne today. It was an exciting and productive moment in our family.  Check out the pics! I'm a blessed and....proud Papa!