Reflections of my Nepal Mission Trip-
I've never been one to consider open doors and closed doors as a critical evaluative process. Mostly, as I have seen how my interpretation of closed door and open door thinking is often flawed by my own heart- my position of late years is that in looking to be useful to God- I consider the opportunity- surrounding Biblical motivations, the gifting, the practical availability and finally the stirring of my own heart.  I think that all of us, no matter how much we deny it- at some point and to some degree are compelled by the subjective interpretations of our heart.  I pray only that as my heart is now in the hands of a great God- that His "will" would be my motivation, and with that, I go out into this life with the confidence of His sovereignty. 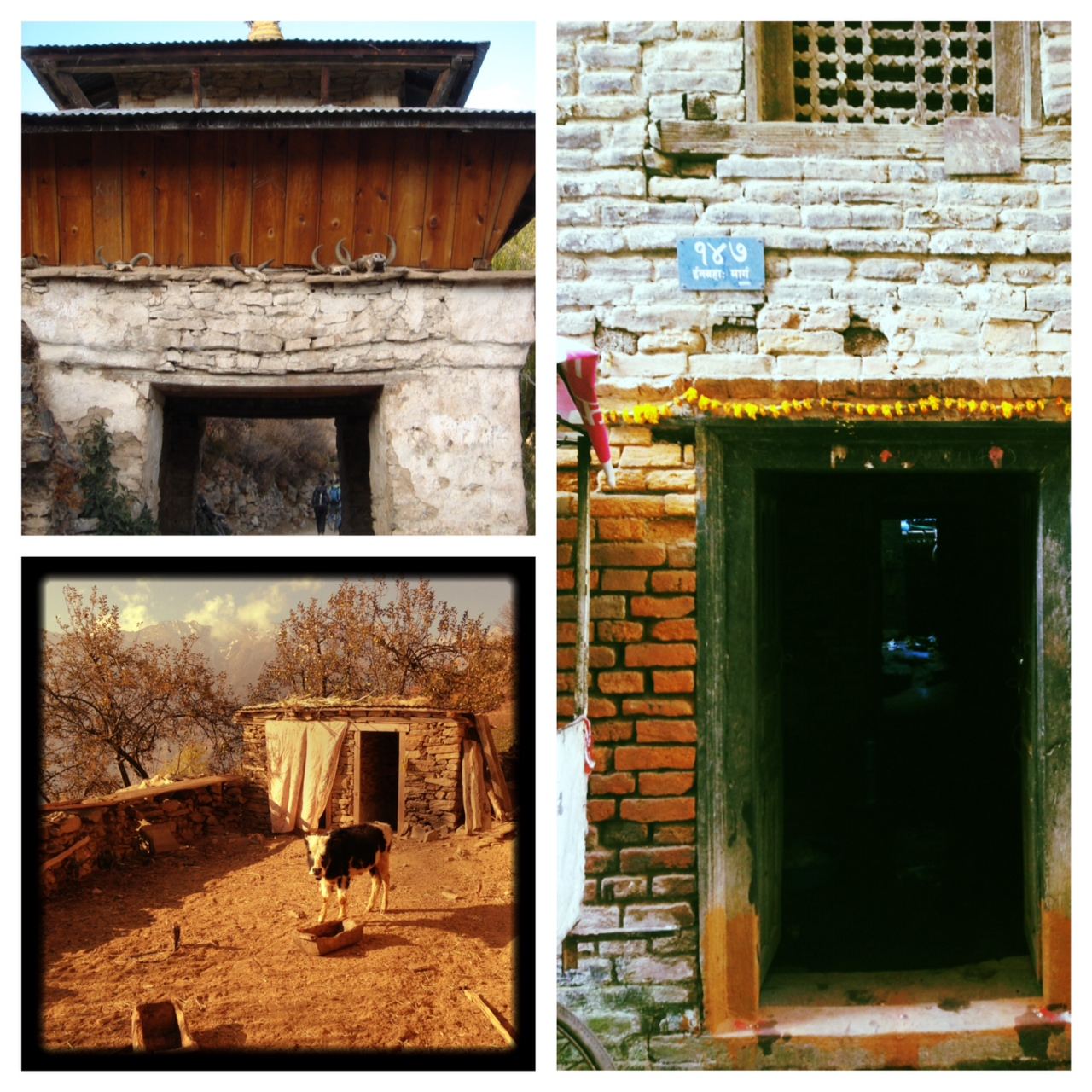 With this notion, I now consider the "open doors" of Nepal... 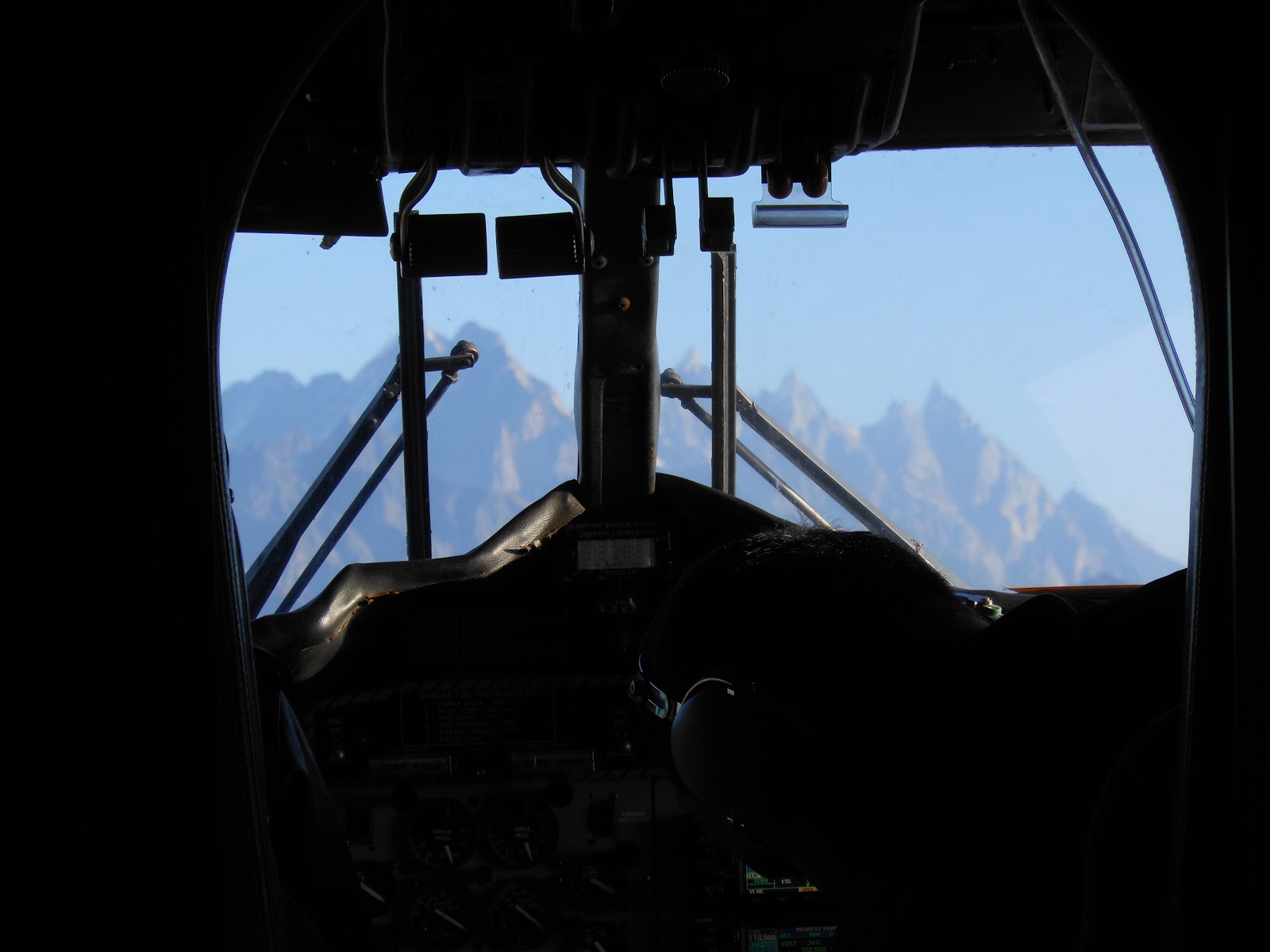 As a group formed from across the country, we teamed together under the organization of "Climbing for Christ" Mission Group( C4C ).  Reaching lost people in mountainous areas or mountainous countries is a daunting task.  Many people go to the awe-inspiring and beautiful country of Nepal each year.  Few people venture into Humla, the "hidden Himalaya" region.  What seemed like a conceptually difficult challenge proved to be an exciting opportunity to see God working in amazing ways. It appeared at first much like this picture of the plane heading towards the wall of rock - that the plan of coordination was on the fly, haphazard, unforeseen and with ill-defined goals.
Missional thinking had been an area of "pre-training" and certainly the attitude of a servant's heart had been cultivated prior to my departure, but the desire to grasp at logistical planning was still at the forefront of my heart. I had to abandon much of the "control" I had deceived myself I actually maintained in my "reality life"….this was the new reality.
In my own limitations, it was overwhelming to consider what logistics would be required to make a "successful" attempt at being useful in the "Hidden Himalayan " region of Humla.

What became clear as the mission trip unfolded in front of my eyes is the definition of success is established by God and for God and I am merely a broken and cracked pot held together with enough band-aids to be useful for His glory. Our leader- Gary Falleson  was excellent at negotiating all the details of this effort. The following account is my attempt to best summarize the events that transpired over the past month while visiting Nepal, both in Kathmandu and Humla regions. 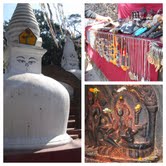 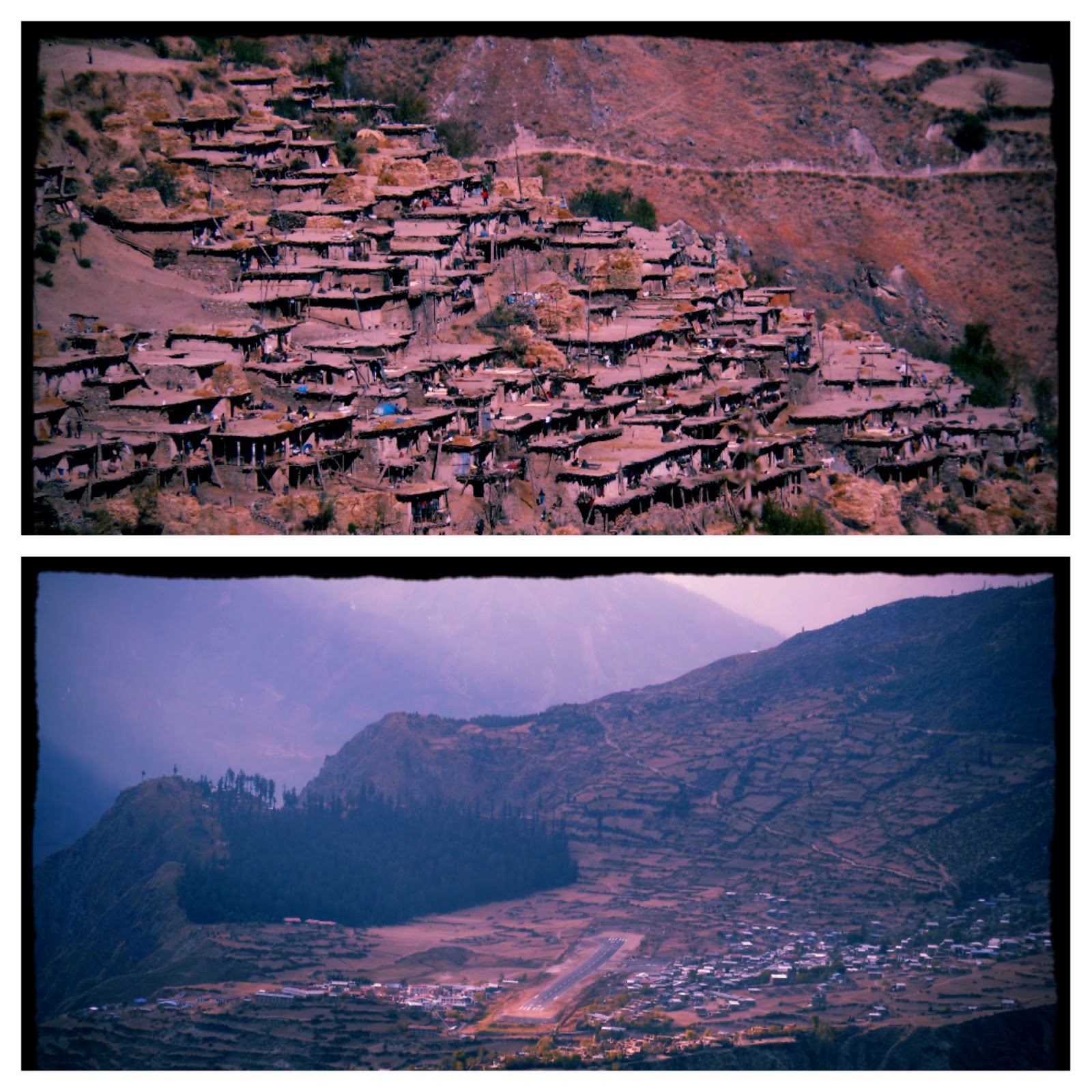 Having left my family in Portland, Oregon in early November, I flew  from Portland to Guangzhou, China and then to Kathmandu, Nepal where I met the rest of my team as they had just arrived within minutes of my flight. Our early time together seemed to be one of revelation as we surveyed each other up and down- establishing common grounds of doctrine, backgrounds, and goals and learned together of the culture for which we would be temporarily immersed. These relationships would be a great opportunity of encouragement and of growth.  We were purposed to be a divided team. Half of us would go and serve in a local urban orphanage while the rest of us would take a 3rd world puddle- jumper plane to the Simikot airstrip of Humla Nepal . We would then trek through the mountains there and discover what God was doing there and see how we could get involved to further the Kingdom. 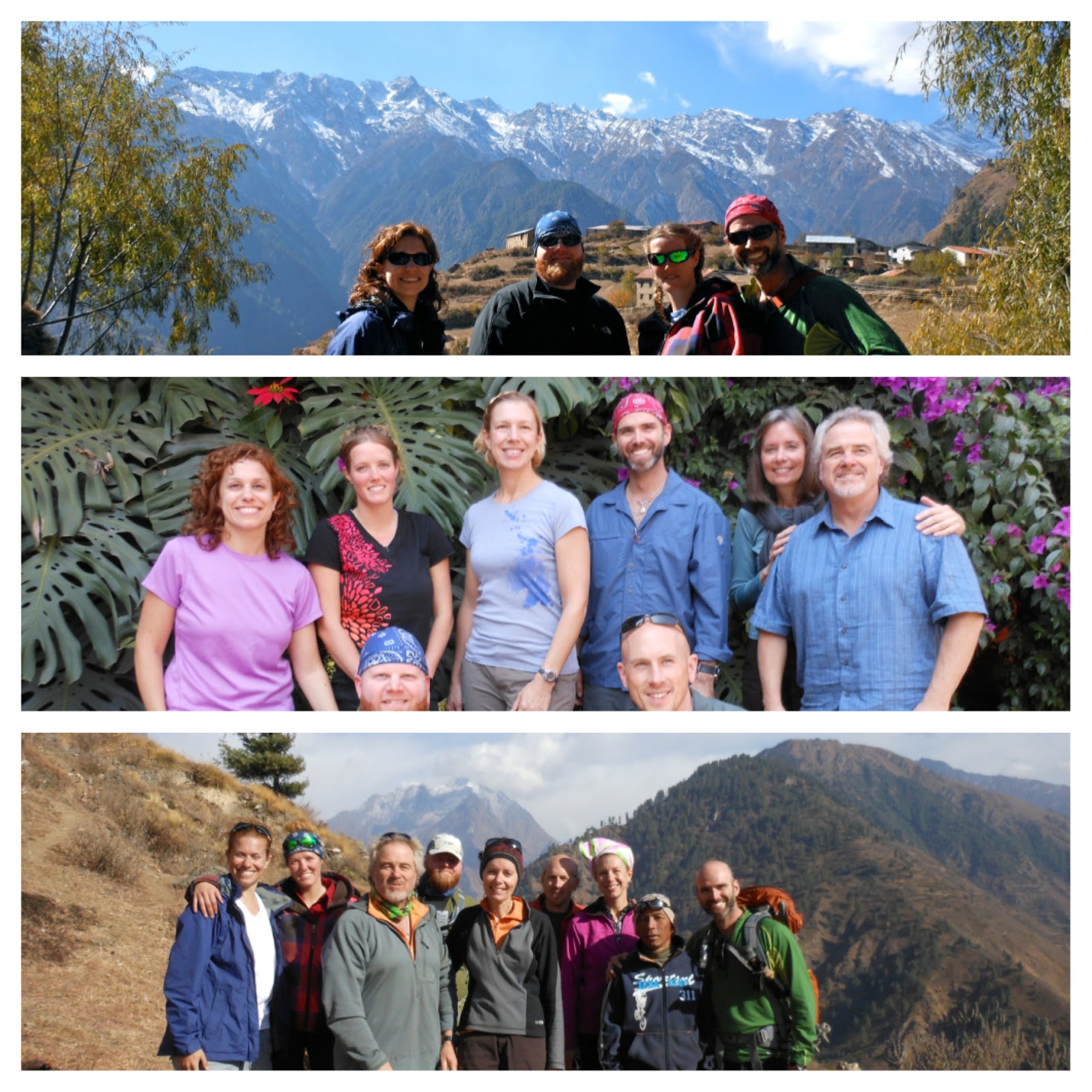 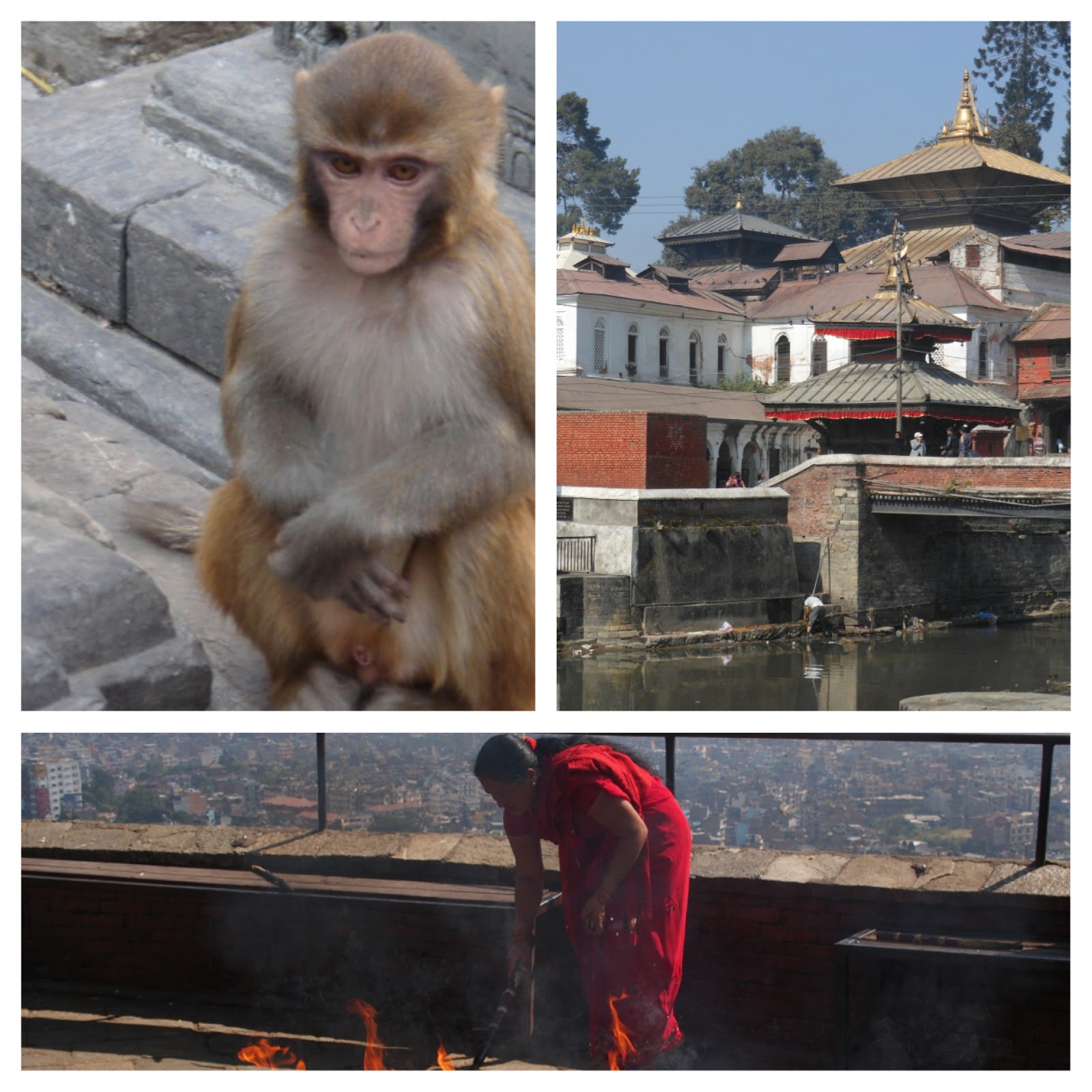 As it turns out, those first two days in Kathmandu turned out to be the growing of a beautiful fellowship.  We spent our time there getting acquainted not only with each other but also with the world around us.  Nepal, being primarily Hindu and secondarily Buddhist, has very few Christians.  What we saw together, prepared our hearts for the work ahead.  With the blending of Hindu and Buddhist traditions to form Nepali culture, we found that we were not only confused, but so were many of the Nepali people we initially encountered.  Much like America, the culture blends components of multiple backgrounds and faiths.  Taking trips to the Monkey Temple and the Hindu Temple&Cremation site PashuPati put things into context for our outreach ministry and service to the local people.  At night we would fellowship over dinner or play cards.
With just a short, but rewarding time together, our group divided into an orphanage team and a trekking team.  The ladies of our orphanage team went with Pastor Tej to one of his local orphanages to stay with the children there for a week and serve them mightily with arts, crafts, music, encouragement of love and the hope of the gospel.  Strong bonds were made there that will be lifelong as several of the children received sponsors from the US who would now be supporting and praying for their growth and well being.

I left with the trekking team for the Humla region by way of a short stay-over in NepalGunj.  After finally arriving in Simikot, the capitol of the Humla district, we were encouraged to learn of 6 people from a local "house church" that were living in this region.  I think in retrospect, it was a mutual encouragement.  Being a Christian in Nepal where the caste system, fledgling democracy, and remnants of the Maoist Communist efforts dominate opportunity for liberty and growth, it is difficult to get a church off the ground and running.  We met, prayed, and worshipped with the local believers and even brought one into our folds as we headed out into the mountains in search of more opportunity. 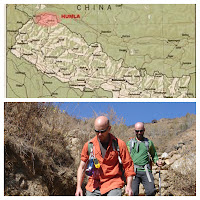 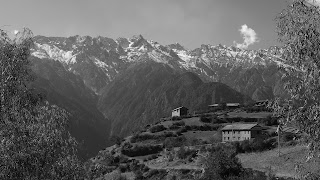 Our journey took us up and over several mountains and valleys which led to overnight stays in the villages of Tharpa, Taehae(sp?), and Barkhand (sp?)  .. Looking over our shoulder, we would often see our previous route and the village of Simikot sitting high on the hill.
We met with school children , village locals, and elders sharing hope and good news, bringing trailside medical care, hygeine training, and various blessings of comfort care (hats, toothbrushes and floss).  Of the various people I encountered and/or treated, the diagnoses included the following:
Lacerations
Peptic Ulcer Disease
Tinea Capitus Kerions
Dental Abscess
Intestinal Parasite
Vaginal Bleeding
Migraine Headache
Radius/Ulna Midshaft Fracture
Gastroenteritis
Acute Mountain Sickness 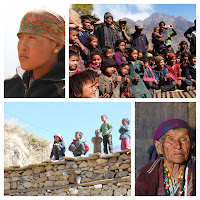 The people were as much a blessing to us as we were to them.  They have incredible strength and resolve that can be seen in the stoicism of their face as they greet each day and the work in front of them.  The many plateaued flanks of the mountains provide them with just barely enough landscape to feed their flocks and grow enough for a harvest.  The children seem to grow up fast. As we would come into each village, the people(esp. the children) would gather on the rooftops to see who was coming.The mountains were there neighborhood and the altitude did not phase their efforts to chase all around us in hopes of chocolate or some treat.  I could see in their faces a stoicism of hardness. The plight of their lives was one of tremendous work.  Living with them for those short weeks, I watched as women would wake early to go collect wood, rock, and dung for the needs of the family. Children carrying children on their backs.  It seemed that family boundaries were less distinct and that village life was the family unit. 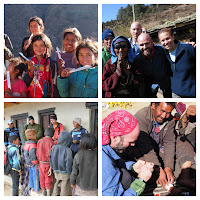 We would sleep on the roofs and eat with the villagers in their homes (they insisted), trying to appreciate their hospitality and also keep our weak western GI tracts from developing distress.  Smoke filled the homes as they cooked over open fires with out functional chimneys.  Even as the air was filled with smoke, the gospel rang out true when they would ask what motivated us to come out to this neglected area of the country.  We would show them the Jesus film on a portable LCD and our pastor/ guide traveling with us would field questions to bring clarity. While some came forward to have a relationship with God through Jesus Christ, culture and tradition is strong for others, yet the questions continued to come.  I only pray that gifts, blessings of temporary healthcare, hugs, and the encouragement of someone caring would only show our motivations to be authentically rooted.  Even as I considered my new friends in the mountains, their cultural heritage and plight of harsh living; I was continually reminded that my purpose was not to change a culture, but to bring hope to a heart.  No short supply of antibiotics, or antacids could change the habits of dirty water or bad hygiene. 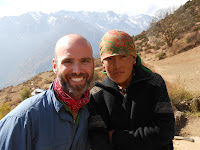 While I often felt that my medical care  barely nicked the surface of a deep wound of hurt, it was encouraging to see some hearts changed for the Lord.  I pray that they would remain steadfast in their hope.  The harshness of this life is a constant reminder to not be lost in some prosperity promise for today, but a hopeful future for tomorrow. Below is a young woman who was suffering with 6 weeks of bleeding and fever prior to my arrival.  My only medical care was to provide Tylenol.  By the grace of God, her bleeding stopped on it's own.  The effects of my pill work might last only a few days, but the hope she has now in Christ is one eternal.  Chorringen was her name and I look forward to seeing her again one day. 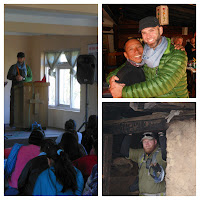 After our journey through the mountains was completed and we had accumulated enough GI distress to last for a year, we had two more days in Kathmandu prior to returning to our various lives back home.  I was asked with my friend Michael to preach to a local church in Kathmandu. It was an honor that was not lost in translation.  Following this, we gathered a fold of pastors from different local flocks and shared a meal together.  We feasted on fellowship, drank tea of eternal hope, and had desert of shared doctrine and mutual support.  It was a meal I will not forget.
Some may criticize short term mission trips as being logistically heavy to negotiate, hardly worth the expense compared to just writing a check, and superficial in their depth of scope and relationship.  I might have said the same things not too long ago.  I am so thankful and encouraged to now know a different experience.  As I looked in the eyes of my fellow missionaries, the local pastors, and the flocks of people we served during that brief time in Nepal- I am convinced even more of God's sovereignty to orchestrate to Himself a people coming together to worship Him and love each other.  I pray that I can see them all again- this side of Heaven. 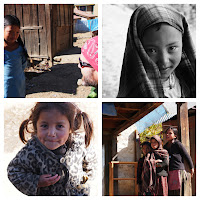 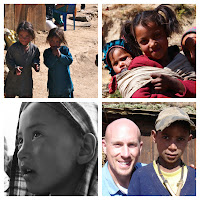